Come back a little later today, Tom. I have been writing. I have thousands of new words. Well, the words aren’t new. The way I put them together is new. That might not be very new either, but there’s lots of them in one place that might make some sort of sense. Maybe. 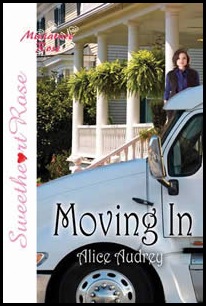 
Many of you may have seen Alice Audrey from Alice’s Restaurant commenting here. You may know her from her own blog.


Alice Audrey released her first book, Moving In, February 2010. I read it Sunday night. If you like sweet, fast-paced romance with a hot hero and all of the misunderstandings that two people can throw at each other, then you will love this story.


Moving In is well written, as you would expect if you’ve read her ongoing story Suzie’s House (a story related to Moving In) which she posts on her blog every Friday. Moving In is contemporary in its time frame and sex is only slightly suggested.


Do yourself a favor, buy Moving In and learn how Diane and Trigvey connect.


My only complaint, dear Publisher, is that it was not long enough. I need more. Hurry up and publish another book by Alice and let it be longer.


From Alice, I want to know from where the name Trigvey comes.

Not only has Alice Audrey released her first book, Moving In, but she has also created an Association meme. Here’s the lovely meme button.

~ press the button to find the rules ~
Alice said: Excellent
Nessa said: Fritters
Now, I’m supposed to tag someone else or leave it open ended which is the option I choose since I’m not really sure how this works. I can’t tell if I should follow the other players around and associate to their words or if Alice will collect them all and then post the list.
I’m really confused.