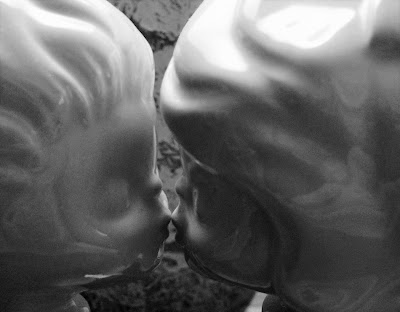 Emma kicked the marigolds that grew along the crumbling sidewalk. She scowled at the dandelions growing in her uncut lawn. They were half mustard yellow and half faded white. She plucked one up and crushed the head between her fingers.

The front porch screen door slammed as her daughter, Sara, struggled out with her suitcases. Her turquoise capri slacks caught on a protruding nail and ripped. Sara ignored the damage, dragged the luggage across the dirty planks of the deck and down the stairs, bumping and banging the bags as she descended.

He leaned against his beat up jalopy, smoking a cigarette. He called it a classic, but he drove it everyday to his minimum wage job - if it started. He threw his butt on the ground. He smashed it out with the toe of his worn boot so it wouldn’t light the trash on fire.

Sara tripped in a concrete hole. Emma held out a hand to steady her. Sara leaned in to kiss her other on the cheek. Emma turned away, eyed the peeling paint around Sara’s bedroom window devoid of curtains. Sara’s lips fell on flaccid skin. She turned away from her mother and towards him.

He popped the trunk jangling the tin cans tied to the car’s bumper. He got behind the wheel, cranked the motor several times before it caught and started blowing black smoke onto Sara’s shins.

Sara lifted her bags into the cavernous compartment and slammed the lid. She climbed into the passenger seat. She waved to her mother as he pulled away from the curb.

Emma watched her daughter’s reflection in the dirty windows across the front of the house. Her image grew smaller as she moved right to left, then disappeared at the corner.

Sunshine filtered through shear lace curtains glinted on crystal wine glasses, a set of silver ware for twelve and two china gravy boats. Emma sorted through the gifts, placing them in bubble wrap and totes so they could be taken to Sara and John’s new home when they found one. Sara had plenty of space in her family room to store the items while they looked.

John moved the containers off of the table as Emma filled them. He smiled when Emma showed him items from her relatives: electric foot warmers from Uncle Bob, his and her back scratchers from Auntie Anne and yellow ducky sheets from cousin Mary. John held up a decorative figurine of the three monkeys. His brother Manny signed the accompanying card.

They took a break when the Timothy Mason longcase clock in the corner of the formal dining room chimed out three o’clock. They waited for the echo of fifteenth ring to still before the moved outside.

Sara brought warm chocolate chip cookies to them on the front porch after they finished their cataloging of the presents. They rocked in Emma’s chairs, inherited from her grandparents. Ruts marked the wooden slats. Sara sat on the swing like she always did.

A tear rolled down Emma’s cheek when she looked at Sara and John’s luggage stacked near the railing. Pink hearts covered Sara’s ID tag and smiley faces decorated John’s.

John handed Emma a crisp, cloth hankie. She blushed, got up and went to smell the coral tea roses growing by the stairs down to the sea shell covered path. Sara joined her, placed an arm around her mother and led her back into their ancestral home. John followed carrying the suitcases up to Sara’s childhood bedroom.
Posted by Vanessa Victoria Kilmer at 3:15 PM 2 comments: 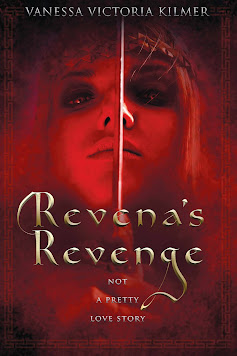