May Berry had lips as red as cherries. Her maid brushed her long black hair until it shown like ravens’ wings. Her skin, soft and alabaster white, helped create the image of a delicate damsel in need of constant care and protection. Her mother kept a close eye on her.


Mother had big plans for May. Mother kept her ears open for the most eligible bachelors available in their social circles and even above. Mother was sure May would marry into the peerage as long as Mother could keep May pure and unblemished.


Mother made sure May never went anywhere alone so that her chastity could never be questioned. May did not walk the streets of London Town even with an escort. May only spoke of the weather or the current fashions. May stayed quiet because Mother said no man wanted a wife with her own opinions. At parties and balls, May smiled and nodded and planned. May had to find a way to get away.


May watched for her chance to get out of the house and away from her keepers. Her opportunity came one night in the Spring when a flu brought down almost all of their staff and everyone in the family except her. She waited until dark, dressed in a set of her brother’s old discarded clothes, snuck by Sally, her feverish and sleeping maid, and climbed out of her bedroom window. When she reached the ground, she looked up, amazed at her audacity. She starred in horror as her maid climbed down the trellis after her. The sick girl lost her footing, dangled for a moment then let go, falling to the ground.


Sally whimpered and moaned as she lay atop her twisted leg. May ran for help. It took six weeks before Sally was up and walking with a stick. During all of that time, May’s doors and windows were locked and big, burly guards stood by them. May felt bad about Sally’s accident so she gave up trying to escape. She went along with Mother’s plans but no one offered her marriage.


Mother decided May needed a new wardrobe for the biggest ball of the year. They went to town to visit the dress maker. It seemed like everyone that was anyone was at the shop on that day. Mother haggled with the shop owner over a special bolt of fabric. As the minutes went by, May got pushed towards the door. She realized no one was watching her. She slipped out and walked.


May found her self on Tower Bridge gazing out at the Thames.


May did not look at the man who spoke to her.


“The river stinks,” said May.


“You do have an opinion.” The man laughed. “You never expressed one when we danced.”


May turned to see the Duke of Grafton smiling at her.


“I wanted to ask for your hand but I could not see myself married to someone with so little interest in the world. It appears I misjudged you.” The Duke took May’s hand and bowed, placing a kiss upon her gloved knuckles. “I am glad to see I was wrong in my initial view of you.” 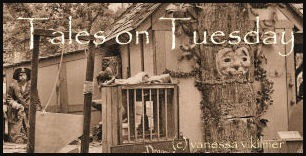 ~ What are Tales on Tuesday? ~

Find out about Tales on Tuesday Here.
The prompt for next Tuesday, June 22, 2010 is “Hawaii Five-O.”
If you have a TV show based theme you’d like to suggest as a prompt, mention it in the comments.
If you wrote a short story for today, sign into Mr. Linky.