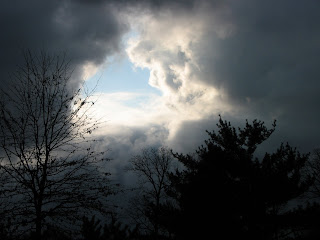 "Breakthrough"
Photograph by Vanessa V. Kilmer © February 27, 2008
The Wordzzle #55 game is brought to you by Raven.

A shadow stumbled across the courtyard only to ricochet back to its owner when it passed the mirrored surface of the glass stagedoor to The Choral Society.

It was not true that a vampire cast no shadow or that he could not see himself reflected in a mirror. These were just fancies some fool with a printing press distributed to the ignorant masses.

It was true, however, that a vampire had no soul. Upon being inducted into the Great Undead, all humanity was lost and the pluralism of craving what one could no longer have warred with the need to feed on that which was forever lost.

While his long gone but not forgotten personhood knew it was wrong to suck a human dry, the mathematics of counting simple calories told him he needed human blood. He could live on rodents or larger animals, like dogs and cats, but human blood was more compatible with his demonic DNA and the calories were far richer. He even fancied on occasion that he could get some residual sense memories from a person's venous fluids.

Unfortunately, he found himself in a ghost town and ethereal bodies were not known for containing viscous substances and with no human trash around not even a rat scurried through the alleyways. . . . .

I take names from my personal kingdom and write stories that have meaning for me. They usually reflect my own inner demons, worries and fears that plague me at least three times in my dreams because it takes that long for my subconscious to get a word in edgewise. One day I will have a best seller for all of my angst.

Sara’s life felt wrong to her. The hours she spent working at the printing press cast a shadow over her spirit. Dangerous and dirty, at least one ink spot on each flowered, cotton jumper she owned, her humanity fed the machine and crushed her mind.

Sara belonged to the choral society of the small town where she grew up and lived these past forty two years. Her personhood, her very vision of her true self, depended on her membership in this group.

She craved the singing. When she wasn’t practicing or performing in a show, she organized fund raisers, collected costumes and researched music for the director.

The pluralism of her meaningless day job and the all consuming passion she had for the group contrasted like day and night.

Stan, the director of the singing group called Sara to his office one night after practice. His office was really a refurbished broom closet, dim and dank and cramped. Sara was holding a Chinese auction to have his office redecorated as a surprise for the opening season in two months.

“Sara,” he said, “we have too many contraltos right now.”

He looked passed Sara’s right ear as he spoke.

“It is a matter of mathematics, you see.” Stan’s chair squeaked as he shifted his weight. His gaze slid over to the door behind her.

“You are the weakest singer we have, so I must ask you to turn in your songbook.”

Sara’s breathing became rapid and shallow. The ricochet of Stan’s words in her mind caused her a splitting headache.

Stan held out his hand to receive the entrance card to the only kingdom Sara ever wanted.

Stan asked for the sheet music three times but Sara’s inner demons drowned out all of his words. She no longer heard his voice, just a buzzing and high pitched squeal.

“Here,” said Stan, “you can take names and phone numbers of the members so you can still help with the productions.” He reached to take the music book from her.

It was worth more to her than any best seller could be.

Stan pulled on the bound music to pry it from Sara’s hands.

She vomited on him as he got the book free.

In this kingdom, called The Choral Society, we take names of the humanity who have shadows on their hearts and inner demons marring their personhoods, people who do wrong at least three times (this is the mathematics of evil and none of that silly pluralism of good and bad in each us,) slap the list on a printing press and create a best seller called “Ink Spot on the Soul” and let the gold coins ricochet into our bank account.