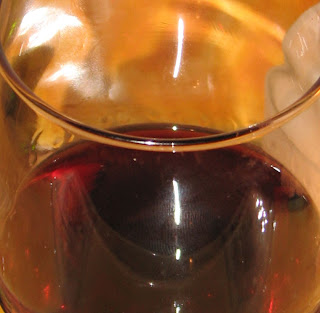 "Bacchanal"
Photograph by Vanessa V. Kilmer © March 24, 2009
Quilly has a weekly game called Three Word Thursday. This is Week 7. Learn how to play and learn some new-old words.

These are the three words this week -

bacchante: a priestess or female votary of Bacchus; a drunken reveler.
queachy: yielding or trembling under the feet, as moist or boggy ground; shaking; moving.
jibber: to balk at doing something; defer action; procrastinate.

Tall, lithe, slightly effeminate and with a leopard skin riding low on his hips, Bacchus, tossed his golden curls over his right shoulder and sauntered out of his father's presence.

Jupiter liked his wine well enough, but now he complained about the celebrations.

Bacchus, as the god of liberation, helped his followers free themselves from the confines of their daily lives with wine. For a brief while, the humans could be as gods. Unfortunately, this year, a bacchante had stumbled her way over to Jupiter's temple, thinking she had found the public latrines.

Mercury, always in search of an advantage, tried blackmailing Bacchus for his Thyrsus.

Mercury had trouble getting girls, what with his flitting here and flitting there and never spending much time in one place. When Bacchus refused to give up his staff, Mercury flew to Jupiter's throne room to beg an audience with the king of the gods.

Jupiter had not noticed the desecration to his shrine. No one else wanted to be the bearer of bad news and make Jupiter grumpy.

Mercury gave Jupiter the message that Bacchus' follower had soiled Jupiter's sacred confines. Jupiter tossed thunderbolts in his anger, causing the floor of his royal residence to become queachy like a stormy sky. Mercury decided to flap his little wings and hot foot it out of there.

Bacchus did not jibber his the time away. He sent Jupiter a spicy little libation and a flagon of his best red. Father and son made up. People would continue the bacchanal every March 17.
Posted by Nessa at 1:00 AM