Recipe #1 - Meaty Balls: The Best You Ever Eated 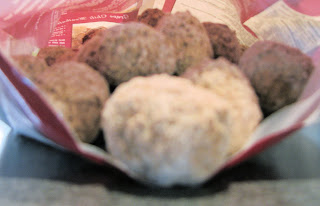 These Meaty Balls are the best party food you will ever serve. From reading this recipe, I know you won't believe me and who could blame you. As a writer, I am born to lie. But I'm not fibbing here. Let's just say I am working on my non-fiction.

I make these for every backyard picky-net we have; I make them every year for our company Christmas party. When I don't make them people want to know where they are. A friend took the recipe and makes them as fund raisers for her daughter's cheer-leading group each year.

I'm feeling cranky this week, so I did a double 666 theme in writing up the recipe, but the amounts are correct.

6 quart slow cooker (Turn it on high to heat that sucker up.)

6 pounds, fully cooked, frozen, Italian style, cocktail size meatballs (I think they are 5/8 of an ounce.) You can call them hors d'oeuvres size if you are the snooty type. My aunt, who originally gave me this recipe, made the meatballs from scratch and you can do that if you are an over achiever, but your efforts will not make them taste any better.

60 ounces ketchup (Use Heinz because I own stock in the company. No, see there I lied. Sorry.)

6 times 4 ounces of beer (QV likes Rolling Rock, so I use that so he can get mad that I am "wasting" his beer.)

6 dashes of garlic powder (I like garlic, so I add lots and since everyone will eat it, the kissing later won't be too awful. Oh, you know you have those kinds of parties.)

6 shakes of onion powder (Make sure you are not using garlic salt or onion salt. You will get plenty of salt in the ketchup and blowing up like a water filled balloon is not attractive at parties.)

Start this as early in the morning as possible. I usually begin them around 6am.

Open the bag of frozen meaty balls. Dump them in the slow cooker. Put the lid on.

In a big sauce pot, empty the entire contents of the ketchup bottle. Pop open a beer. (Drink it if you have relatives coming over during the day. If you do this step, you'll need extra beer.)

Open another bottle of beer. Pour some in the ketchup bottle, put the lid on and shake the bottle. This is so much fun. When you open the bottle, ketchup will explode all over the kitchen. I guess I should have warned you, huh? Pour the fizzy beer from the ketchup bottle into the sauce pot. Add the rest of the beer from the can. (We use both bottled and canned beer in our house, at the same time.) Add a second bottle of beer to the ketchup in the pot.

If you like things on the milder side don't add the garlic and onion powders. Otherwise, shake in however much you like. I do about a good heaping tablespoon of each. Use a whisk and swirl it around.

Turn on the flame and boil it for a few minutes, mostly just to make it hot. You don't want to cook out all of the alcohol. You'll need to calm the children down later. Oh, and watch out for the lava like bubbles that can erupt on the surface.

Leave it on high for a couple of hours, then turn it down to low for another six. They will then be ready to eat at 2pm, which is perfect for me, because I am usually napping by then and my guests can take care of themselves.

The longer they cook, the better they taste. I would try to describe the flavor but it can't be done. They do not taste like ketchup and they do not taste Italian. They are truly different.

Eat them on club rolls or by themselves, so you can eat more of them.

They freeze well too but you really won't have any left. People will take them home if they haven't eaten them all.
Posted by Nessa at 1:00 AM