Sorry I am late. Technical and hormonal difficulties.
I wrote a fairy tale this week.

Once upon a time there was a boy named Senisa.
Senisa led a happy life - for awhile.
His father took him on hunting trips and let him train with the soldiers. His mother stitched him fine garments and let him sit between his parents at the high table.
Then, his father died. His mother was heartbroken, but being the king’s cousin, she had to remarry.
Mortret, brought with him two sons, Belial and Azazel and a bad attitude. Senisa’s mother was relegated to the solar and Senisa to mucking out the stables.
Caring for horses and outwitting older step-brothers makes a boy strong and cunning. Dodging blows from a mean step-father and planning ways to free a mother makes a young man burn with vengeance. Unfortunately, Senisa could not save his mother.
He knelt by his parents’ graves under the ancient apple tree, white petals fell like tears and two golden apples dropped like hail upon his head. He pocketed the yellow fruit. Eyes dry, he made his plans.
In the hall, he lifted his father’s sword and shield from the wall. Shaking from memories, his step-brothers surprised him, jumping him from behind. Senisa fought free and ran.
Senisa hid in the woods. He saw soldiers trying to protect two women from bandits. The soldiers were not doing well. Senisa jumped into the fray, killing several bandits and chasing the rest away. He looked around and saw his step-brothers coming after him. The soldiers reorganized themselves around the women, who boldly watched Senisa from their carriage. Dazzled by the golden girls, he nearly forgot he was running for his life. He bowed to the ladies and dashed into the forest.
Reaching the castle, he entered the grounds to find a celebration taking place. He tried to stay out of sight but the golden girls pointed at him while speaking to the king. Grabbed by guards and his weapons removed, he was brought before the royal party.
Mortret spoke in the king’s ear. Belial and Azazel stood on each side of the golden girls, the brothers cruelly grasping and squeezing the women’s wrists.
Mortret walked up to Senisa and punched him in the face.
“You dare come before the king and his daughters?”
Senisa fell to his knees, jaw broken, blood flowing from his mouth.
“Enough!” The king stepped forward. “You two, remove your hands from Avalon and Idunn.”
The princesses ran to their father.
“He is our cousin, Senisa,” said Avalon.
“He saved us from the bandits,” said Idunn.
“He stole arms from my hall,” said Mortret.
“He is but a stable boy,” said Belial.
“We saved your daughters,” said Azazel.
“No, father, he has our tokens.”
“Search him,” ordered the king.
Sensia was restored to his rightful place on his parents’ lands. He did not marry one of his cousins but they became good friends. They all lived happily ever after.
Mortret, Belial and Azazel were sent to work in the gold mines. They did not. 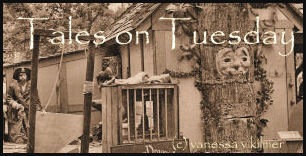 Do you have a TV show theme to suggest for future Tuesdays? Leave your suggestions in the comments.
Here's Mr. Limky. Sign in if you wrote a story for today's theme "Golden Girls."
Be sure to link right to your story.