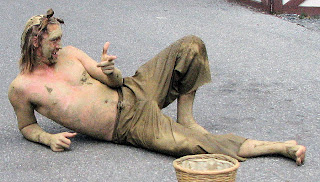 "Dirty Boy"
Photograph by Vanessa V. Kilmer © August 13, 2008
Quilly has a weekly game called Three Word Thursday. This is Week 3. Learn how to play and learn some new-old words.

Penniless, Joan took two part-time jobs to supplement the income of her daytime work to pay back all of the debt her quondam husband, Blows Like a Wind, formally known as Stan, created when he gave all of their savings to the cult he joined a year ago.

BLaW tied a pink ribbon in his hair to get in touch with his feminine side. He gave up wearing underware because he and his boys needed to live free. Instead of speaking, he sang, the vibrations of his voice changing the world. He no longer bathed so his soul would not be blackened with the murder of living beings. The record of his opprobrious actions caused the divorce judge to sign the decree in record time.

The court had granted full custody of their three children to Joan. Not long afterwards, she applied for and received a restraining order. BLaW tried to convince everyone that as the children's father he knew what was best for them. He thought having the ear of the almighty should count for something, but no one bought his casuistry. He attempted to abduct the children four times. He finally gave up when he received his boarding pass for the space ship.
Posted by Nessa at 1:00 AM