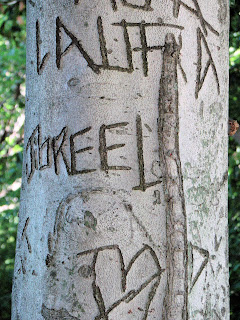 Vacations in a small town were no better than days at home.

Loners, shunned by other children and ignored by their families, Lalifia and Jibreel found each other when they spent the summer days along the banks of the river.

He drew and she wrote, shoulder to shoulder, creating an ageless love story from their lives. In their art and their youth, they vowed to be together for eternity, two hearts as one.

On their last day together, Jibreel took his father's pocket knife and carved their names in the tree where they first met, a timeless and living graffiti.

Email ThisBlogThis!Share to TwitterShare to FacebookShare to Pinterest
Labels: One Hundred Words