Jeff from A Word in Edgewise has a weekly project called Portrait of Words. He gives you several pictures as prompts so you can write a story. Go to his site to see how it works if you want to play and to see his story and others who join in the fun.

Sable and Rosemary sat on the edge of the patio eating BLT’s and enjoying the sunny afternoon. Rosemary’s new house had brought about the visit of her sister. She hadn’t really thought Sable would accept her invitation for a tour, but as usual, Sable had surprised her.

After walking through the house and around the outside of the rosy building, they were having a rare companionable chat over an alfresco lunch, munching the crispy sandwiches and sipping a lovely Chilean Cabernet Sauvignon.

Rosemary wasn’t really surprised that they didn’t get along well most of the time. They were, after all, only half sisters, with a father in common who had kept two families. Sable and Rosemary were the same age. They only met once their father had died. The insurance company informed their families in a joint meeting that the insurance policy was null and void because their father, a bigamist, had committed fraud in completing his application. Rosemary and Sable were twelve at that time.

Now, in their early twenties, Rosemary had married a rich, older man to compensate for her haunted past, while Sable exorcised her demons with various other vices that Rosemary really didn’t want to know about.

Rosemary gently brushed a strand of hair away from Sable’s bruised cheek.

“Did you have another fall?”

Sable held her slender fingers up to her face without touching herself.

“Clumsy me,” she said. “I bent down to empty the drier at the laundromat and smacked my face into the door.”

“You know, you can tell me if it’s something, or someone, else,” said Rosemary. “You could come stay here. No one would find you.”

Sable closed her eyes and one tear escaped and fell over her bruise and dropped to her chest.

“Thanks for your concern…sister, but I’d get hurt just as easily if I were living here.”

Sable stood up abruptly. Once again Rosemary had gotten too personal.

“Nice digs. I hope you enjoy them while you can.” Sable dropped her half finished sandwich on the plate sitting on the terrace, bent to retrieve her purse with one hand and brushed the top of Rosemary’s head with the other, in her typical, “I’m slightly older than you” fashion.

Rosemary didn’t bother to get up. There was no point. Sable was in a hurry to get away from her.

Maybe they were making some sisterly progress. Sable had, after all, come here today. That was a step in the right direction, wasn’t it?

Rosemary picked up their plates and glasses and took them in the house to the kitchen. She would take a nap after cleaning up so she would be refreshed when her husband got home. He liked to have her alert so he could have her full attention.

After putting the dishes in the dishwasher, she went up to the master suite, closed the blinds, took off all of her clothes and climbed into bed. She was always so tired at two in the afternoon and would sleep until five when she would get up, shower and dress for the evening for her husband.

Rosemary was having a nightmare. She never had nightmares. Her dreams were always exciting but never scary. She dreamt she had been kidnapped from her bed. A pair of dirty hands that smelled of oil had grabbed her head and covered her mouth with a stained cloth that smelled of a botched science class experiment. Before everything went black, the hands had stroked her naked body. 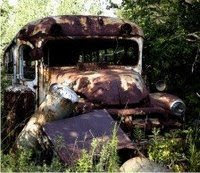 The blackness was gone, replaced by the rusted yellow ceiling of a school bus. Her brain felt fuzzy and her naked skin had goose bumps. She could see tree branches and green leaves through the window above the seat she lay on. The plastic stuck to her back and thighs. Her wrists were tied together and her arms pulled over her head. Her ankles were each tied to a separate seat leg. Rosemary wanted this bad dream to end.

The realization that this was not a nightmare hit her. Her body ached. The metal of the seat legs bit into her calves. The rope that had her arms stretched up made her wrists raw and bloody. In an instant, the volume turned on full blast in this new world and she heard her sister, Sable, arguing with a man.

“Why did you bring her here?” said Sable. “It’s right in her own backyard.”

“Her old man chose this spot,” said the man. “No one will look for her here. Any noises will go unheard.”

“I thought the plan was to kill her?”

“He changed his mind, at least, for the time being.” The man paced. His voice moved from the front of the bus to the rear and back again. Sable seemed to be right below Rosemary’s window.

“You know better than to argue with him. If not, that bruise on your face should remind you.” The man chuckled. “Just go home and go about your normal routine. I’m going to the pay phone to make the ransom call to his office. This will all be over in twenty four hours and then you and her hubby can run off to whatever island he decides to stash all his money. And I can retire from this life of crime. Happily ever after for us all. Well, everyone except your dear sister, anyway.” He chuckled again, his laugh fading.

Rosemary could hear the brush crunch and twigs snap as he walked away from the bus. She closed her eyes. Good thing too.

Sable walked inside and stood over Rosemary. Rosemary kept her eyes closed and pretended she was still unconscious.

“My father was everything to me,” said Sable, “and you took him from me. Now I’m taking everything of yours.” Sable pinched Rosemary’s nipple, digging in with her nails. Rosemary flinched but Sable didn’t notice. Sable moved away, her feet hitting the floor of the bus as if she were running.

Rosemary opened her eyes, the vision of the bus’ ceiling blurred by her tears. If she didn’t find a way out of here and soon, she would be dead. Rosemary had married her rich old husband thinking she would be safe and secure. Instead, she had walked willing into the pits of hell. They always said the devil was attractive. She now knew that to be a fact.

Rosemary blinked several times to clear her eye sight. She looked at the rope around her wrists: old hemp, dry and brittle. She began picking at the fibers. It was her only chance. She kept at it despite the cramps in her legs, the rope splinters making the tips of her fingers bleed and her nails rip from their beds. She ignored the utter humiliation of not being able to hold back her urine.

By the time the sun had set, she had shred the rope on her left wrist. She pulled the rope through the loop in the ceiling, stiffly sat up and bent forward. She attacked the ropes tying her ankles to the seat. She was beyond cold and beyond caring about anything except escape. Who knew how much longer she would be left alone.

Once free, she stumbled from the school bus, falling out the door and landing on her hands and knees on the ground. She nearly gave up but survival was winning.

She crawled away in the opposite direction that her sister (no, she could no longer think of Sable as her sister) and the man had taken. In front of her in the underbrush was an old animal trap. 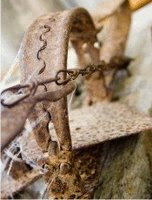 She stared at it a moment. She pushed on each side of the trap’s jaws and forced them open. Using a branch, she pushed on the pressure plate. The trap snapped shut breaking the branch in two with a resounding crunch. She smiled.

Rosemary dragged the trap over to the bus entrance. She positioned it just in front of the steps, pried it open and covered it with leaves and grass. Satisfied that it could not be seen, she jumped up and ran.