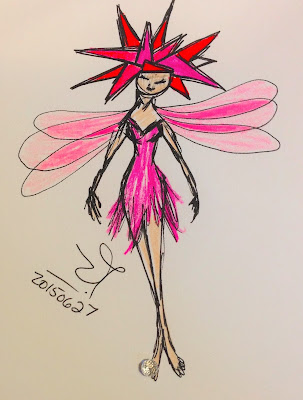 We were watching television when it happened. I think my mother had a soap opera on, maybe Days of Our Lives. That was always her favorite. I have a picture of June Cleaver seated on her sofa: hair smooth and glossy with hair spray, a pencil skirted dress on a pencil thin body, cigarette held between the index and middle fingers of her left hand and a cup of coffee on the coffee table, a dollop of sweet cream floating on the surface of the hot, black liquid.

Walter Cronkite broke into the show and she sat forward, the back edge of her butt perched on the front edge of the couch, her knees locked together over three inch heels. Her bracelet caught the light when she lifted her hand to wipe away tears.

Someone killed King Arthur. Camelot destroyed on a sunny day, on a sunny drive through the badlands of Texas.

Lee Harvey Oswald inspired me to become the woman I am today. His supposed act was the first time I heard the word assassination and it struck a chord in my four year old heart. I wanted to be that person poking my rifle muzzle out of a twelve story window and anonymously taking out my target. And that's how I know he didn't do it. No self-respecting assassin gets caught.

He was a patsy, plain and simple.

All you have to do is think about it to know I'm right. I mean, I don't really know all of the facts but I'm pretty sure it wasn't LHO. I blame Castro and Jimmy Hoffa. They got together to get rid of the guy messing about their girl, Marilyn. Jimmy was especially upset over the way John cheated on Jackie all of the time and Marilyn was too innocent to know better. When John's handlers killed Marilyn to get her out of the way of their plans (John wanted to give it all up to run away to Cuba with her) Jimmy just couldn't take it anymore. He lost his mind with jealousy. He met with Castro and they decided to make some permanent changes.

One night when they were out together at a Salsa club, slow dancing after they had about ten margaritas each, Castro had an epiphany. He knew people. Jimmy knew people. They'd compare notes. If they found any people they had in common it would be a sign that God wanted them to clean up the mess made by a bunch of people who only had self interest as their guiding rule.

Upon sober reflection the next morning over tomato juice laced with lemon, creamy horseradish sauce, and two fingers of vodka, they still thought the idea a good one. They pooled their pocket change ($4,579.18,) called The Maggot (isn't that a great name for an assassin? I wish my code name was as good but somehow I got the moniker, Tinker Bell. I ask you, is that a proper name for an assassin? I think not but it stuck. ~ I digress,) and blamed it all on LHO.