Don't Play Koi with Me 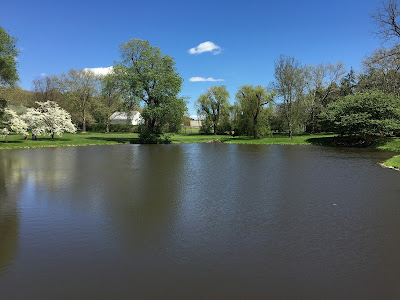 Sunlight bounced across the lake. Fish, just under the surface of the water, turned their faces to the light. White, fluffy sheep dotted the hillside like puffs of clouds fallen from the skies. Red rolled down a hill, picking up speed as his alternating visions of blue and green passed by his line of sight. He stopped just on the lip of a grassy outcrop, face towards the water and looked a Koi in the eye. It winked at him.

Red waved his fingers at the fish and tossed it some bread crumbs he had in his jeans pocket from his morning biscuit. The fish sucked each bit of biscuit in its mouth with plump orange and brown lips. Once it hoovered each piece down its throat, it hovered near the shore, turning left and right as it perused the boy laying on shore, chin propped on fists.

"Why share your meager fair with a goldfish?" asked the goldfish.

Red raised his head, shook it and wiggled a finger in his ear.

"I see by your dress you give up something precious." The Koi jumped, splashed Red in the face with his pectoral fins. "Are you stupid or asleep?"

"That's a mighty word for a peasant."

Red laughed. Only he would have hallucinations that repeatedly insulted him.

"I came here for a peaceful afternoon in the sun. Go away and harass some other poor farmer's servant." He lay down, dangling his bare feet into the pond. He was almost asleep when he felt fish lips nibbling on his big toe.

"Most people, when confronted with a magical fish, will immediately ask for three wishes, but not you. Seriously, what's wrong with you?"

"No such thing as magical fish," said Red. "And even if magically fish were real, which they're not, any magical wishes they could grant, which they can't, would somehow backfire in my face."

"You could at least sit up and look a person in the eye when having a conversation."

"You're not a person." Red yawned.

"Are you ever right about anything?" The fish jumped up out of the water. Red saw it through a slightly cracked eye lid. It jumped two more times. Red rolled over and faced the lake.

"So, now you're telling me you are a person trapped in a fish body."

"A witch cursed me. I must remain in this form until someone makes the right wish."

"I can't tell you. Not because I can't but because I don't know what the right wish is."

"What sorts of wishes have you granted so far?"

"Those are all good wishes," said Red.

The Koi got a decidedly disappointed look on its face.

"I wish your curse broken," he said.
Posted by Vanessa Victoria Kilmer at 9:00 PM