how did you say it happened? 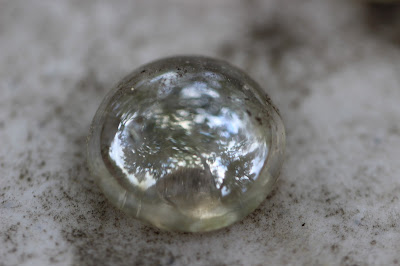 His gray-green skin shimmered from the sweat forming on its surface. The heat floated up from the hard-packed ground and pressed down from the white sky. Zutphen pulled ozone into his body through his pores. His nervous system condensed the blue gas to a healing liquid that mixed with his blood and sent healing cells to his wounds. The open lesions across his faces knit together as his body revived from the chemicals in his tissue.

Lying on his back, looking through eight lidless eyes, Zutphen sighed as he felt physically better. His spiritual outlook, though was grim. His eyes, evenly spaced around his head, gave him a 360 degree view of the trouble he had caused.

It all began when his pod broke through the atmosphere of Earth and dropped through the air like a leaf on the wind. It moved so slow that he descent was captured by cell phones and cameras and sent across the planet via the Internet. Governments tracked his progress. By the time he hit the ocean, his capsule was surrounded by competing factions.

He popped the hatch, popped his head up through the opening and waved. There was a good reason why no one came to this crazy planet during day light hours. The inhabitants couldn't handle a friendly little wave of his flippers without freaking out. Nine different countries, represented by nine different war ships opened fire on his pod, but since it was protected by a shield, the fire power ricocheted and shot off in all directions. They blew each other out of the water, metal and bodies flying into the air in bloody pieces and then raining down around Zutphen.

The drones caught it all, televising the carnage around the planet. Fearless leaders across the globe panicked, poked index fingers on red buttons, sending bomb carrying rockets to all corners of the world, against friend and foe alike. The destruction didn't take long.

Zutphen ducked back into his pod and closed the door just before tidal waves sent him tumbling across the water, bobbing like trash. He took at nap.

He woke when he stilled. His pod had a permeable skin that allowed light and sound through. His eight eyes told him he was upside down on a beach. That meant his pod was damaged since it was designed to always remain upright relative to his body. Great. He rocked back and forth until the pod turned enough to get the door in a position where he could crawl out.

Debris lay everywhere. Smoke rose in thick, dark columns like a forest of undulating leafless trees. He absorbed helium through his skin into his body from the air. He took in enough so that he floated just above the ground. The tips of his flippers dragged in the sand, leaving lines along the ground as he moved.

He would kill Inuvik when he got back home. This was all her fault. She knew Zutphen couldn't resist a dare and now everyone on Earth was gone.
Posted by Vanessa Victoria Kilmer at 4:24 PM