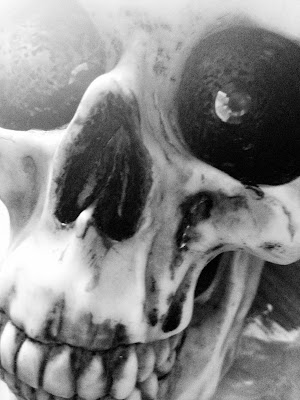 Brad's routine included an alarm clock that he invented to get him out of bed when most people were just falling asleep. He slept from one in the afternoon until ten at night. He didn't really get a full nine hours of sleep since it took him about three hours to fall asleep, but years of experience with this shift work taught him that even a few hours of resting his body was better than trying to get the physical and mental to sync up.

Once he did fall asleep, he didn't want to wake up. He could sleep through an atomic blast and so he invented his special alarm clock. A mechanical arm smacked him in the head with a pillow when the alarm went off. It kept hitting him until he got out of bed and turned off the switch which was located across the room from his bed.

Tuesday night, he woke up on his own. A very unusual occurrence. Something woke him up just before his alarm was set to go off to get him up and go to his job as a night watchman. He sat on the edge of the bed, shaking his head. He felt vibrations up through the soles of his feet. He looked at his closed window. He turned off his alarm and turned on the TV.

The News anchors looked disheveled. He turned up the sound.

"...an outbreak this severe since the late Middle Ages. An average of only seven cases of the Black Plague occur every year, mostly in Utah, New Mexico, Colorado and Arizona. The CDC has no idea why it is out of control now."

Brad felt something in his chest. He hit mute on the remote and cocked his ear like a dog. He lifted open his window. Wailing rose to his condo on the seventeenth floor. He leaned out and looked down. A loose line of people moved down the middle of the road like black ants. They followed a dump truck. The dirge came from that procession. He grabbed his binoculars. Focused on the truck. It overflowed with bodies tumbled in every direction. Men, women and children lay face up, face down, bent and awkward.

He turned back to the TV. The male anchor lay slumped on the desk. He turned the sound back on. The female anchor coughed between words.

"...thousands dropping..." Cough. "...dead..." Cough. "...every minute..." She fell off her chair in slow motion. The camera moved its view up to the ceiling and stopped. A line of words started across the bottom of the screen.

"Stay inside. Stay away from other people if you can." The words repeated on a loop.

Brad closed the window. He went into the bathroom with a bottle of whisky. He filled his tub with warm water and bubble bath crystals. He took the bottle of sleeping pills from his medicine cabinet, undressed and climbed into his bath. This would be the last night he watched.
Posted by Vanessa Victoria Kilmer at 8:00 PM