These are books that I have read more than once and usually read every couple of years.

The Harry Potter series - JK Rowling
I like the continuity of her world and the hints, clues and legends peppered throughout. Simple reading but packed with puzzles to keep one entertained.

The Crystal Cave  - Mary Stewart
This is the first book in a series and my favorite King Arthur books. The stories are told from the wizard's point of view, childhood to old age. The Hallow Hills, The Last Enchantment and The Wicked Day, books two, three and four, respectively. They finally came out in ebook in 2012 as Legacy.

Acheron - Sherrilyn Kenyon
I like all of this author's books. She incorporates gods and myths from all over the globe as characters in her world. Each book is stand alone but with ongoing characters and stories for us series lovers. Lots of love and adventure. Acheron is the main god and his life was not easy. 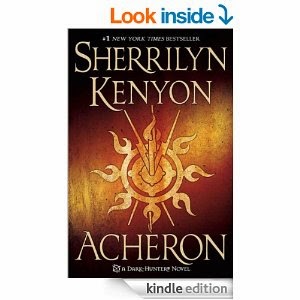 Jane Eyre - Charlotte Brontë
I first read this in my early teens. Don't much care for her siblings books, though.

The Mists of Avalon - Marion Zimmer Bradley
I love this book. Another Arthurian tale, this time written from the point of views of the women involved. Don't care for her other books.

The Hitchhiker's Guide to the Galaxy - Douglas Adams
All of his books just tickle me to death. His absurdity was so spot on for how the universe works.

William Monk Mysteries - Anne Perry
A Victorian policeman losses his memory but must keep functioning to live. Perry also has the Thomas Pitt series which I love, too. At the age of 15, she and her best friend killed her best friend's mother. (Did that get your attention?)

The Girl with the Dragon Tattoo - Stieg Larsson
This is the first in the Millenium trilogy. It is followed by The Girl Who Played with Fire and The Girl Who Kicked the Hornet's Nest. There should have been at least a fourth book in the series but Larsson died in 2004 with the book 3/4 of the way done. Unfortunately, there are problems with the ownership rights to the material. Consequently, some story lines are unfinished but these do not detract from the published material.

Posted by Vanessa Victoria Kilmer at 12:30 AM