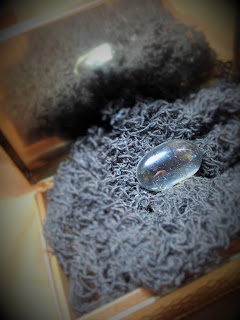 Jason stood before the window staring out at the still dark lawn in front of his house. The view was hidden by night and his own reflection. His black hair was darker in the glass. It stood on end from the hours he spent crushing it within his worried hands. He needed a shave.

He had no idea who had sent him the turkey. The ruined carcass of the roasted bird lay all over his kitchen counter. Bits of its flesh sprinkled the olive green linoleum like meat confetti. The unorthodox stuffing he pulled out of the bird was hidden in his freezer. Normally, turkey would put him in a pleasant stupor but he hadn’t slept in two days.

He wanted nothing more than peace. Instead, the voices in his head clamored for attention. The loudest voice told him to take his find to the university’s archaeology department and let them deal with the repercussions. He spent years dreaming of making a world-shattering find like this. Beware what you ask for. He choked on his laughter.

Another voice suggested he find a buyer, get rich and go hide for the last few days until the end came.

The quietest voice, the most timid of the three and yet the most persistent, kept telling him to do something to prevent the inevitable.

The option to hide and do nothing seemed the easiest. Except he couldn’t sleep. And he hadn’t been able to go back into the kitchen once he hid his prize. His stomach grumbled but food was out of the question.

He leaned his forehead on the glass, closed his eyes and took a deep breath. He’d start with an easy decision. Do nothing or do something. Something or nothing. Nothing would require he sit down and atrophy in the same space with that thing. A jolt of adrenaline kicked off a panic attack.

The freezer door hit the wall. Jason grabbed the brown-paper-wrapped bundle. He jammed it in his jeans pocket and ran out the door. He hit the damp grass face first after only three steps. His leg cramped and burned from his hip down. Smoked wafted from his pant’s pocket. He smelled the paper burning. He slapped at the flames until the package hit the ground. The fire poofed out with a pop.

The note said it would know if he tried to shirk his duty. It would know his true intentions. He stared at it. The rising sun hit its edge and blinded him for a second. That stab of light cleared his mind. He rose to his knees. He reached for the box. Its metal was cool on his fingertips. He got up and limped back into the house.

He got a bottle of water. He sat in his favorite, worn out recliner. He opened the water bottle. He opened the silver box. He took the stone out and placed it on his tongue, took a swig of water and swallowed. Let the world’s redemption begin.

Posted by Vanessa Victoria Kilmer at 7:41 AM