sister of the sea 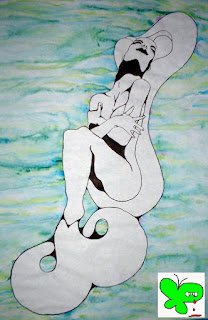 Waves of brine and froth washed over the rocks jutting out into the ocean. The sea was violent and angry, expressing a dissatisfaction with the way things were going in the world. Plastic bottles, limp cardboard and tin cans washed up on the shore, regurgitated from the bowels of the salty deep.

Darya bobbed in the roiling water, confused by the flotsam surrounding her. She hadn’t noticed any ships going down in the area. She dove under the surface to investigate. She followed the trail of garbage. At first it confined itself to a line but as she moved further away from the shore it spread out covering the entire Atlantic Ocean. This was a disaster. No wonder the bounding main was mad. She’d be angry if she were covered in filth. As a matter of fact, she was feeling kind of dirty after swimming through the dreck. She needed to find some clean space to freshen up.

After swimming south for two days, Darya went around the Cape of Good Hope and into the Indian Ocean. It was just as bad here as it was in the Atlantic. She moved on through the islands of Sumatra, Borneo and Philippines into the Pacific Ocean. She checked out the Southern Pacific Ocean: filthy. She had to go down deep into the Mariana Trench to find so fresh water. She cleaned up as best she could before visiting the fifth and final ocean, the Arctic.

She shivered her way under the ice floes and icebergs. She found bits of garbage stuck in the frozen waters.

There were times on her journey when she had to stop to help a fellow creature get out of a confusing maze of debris. Floating trash could be so confusing for creatures who used sonar to navigate. Once she had to clean out the plates of some baleen whales. None of this stuff was edible or nourishment to any of the animals or fish in the oceans. She needed to do something more to help but she had no idea how to solve such a massive catastrophe as this.

While she was helping a dolphin clean out his blow hole, she remembered something she had seen when she was dipping down deep into the Mariana Trench. She took a wad of gum out of the dolphin’s blow hole and then she took off. Time was running out.

She swam down, deeper than she’d ever gone before. The pressure was tremendous. She was getting a headache and her ears were popping. Her lungs hurt. She kept going. She was almost at the bottom. She reached the container (marked with the yellow and black rotating fan symbol) that had been dumped here a few years ago. Though it was round, it bulged out and pulsed at its circumference making it look like a living thing.

Darya pulled the plug at the top. The pressure released. The waters all over the Earth contracted and expanded and blew all of the garbage onto the land where it originally came from.