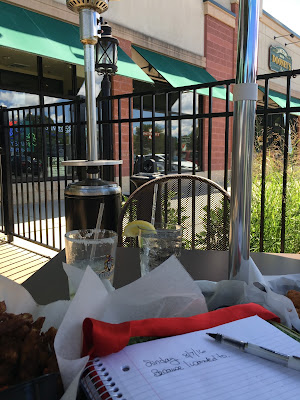 Every other Sunday, I get a manicure and pedicure as my reward for walking an hour each morning. After, I head over to the pub next door for a solitary, but not lonely, lunch. I drink a couple of margaritas, and nosh on sweet potato fries while I write in my journal and read my current read.


Today, an unoccupied table next to mine holds the debris of its previous occupant littered across the white cloth surface. One place setting, not immediately noticed since there are three of everything, says I’m not the only person who eats alone.


Three white, small plates form a triangle. The bottom left plate holds three french fries, uneaten. No ketchup. The plate on the right features three half disks of tomato, each cut across the diameter, three different sizes. Three teaspoons, stacked one atop the other, rest on the third plate. The top spoon holds two candied cherries.


Three elegant, rounded blue bottles of water stand guard where another place setting would be if a second person had sat across the table. Each bottle is open, the twist caps placed so they form the periods of exclamation points. The water level, half full, matches the top of the white and blue labels.


Three Origami boxes folded from paper napkins form a soft tower of white to the left of the bottles. Brown stains leak from one box to the next and onto the white tablecloth, a 3D Rorschach mystery. Leaning up against these packages, standing on their short sides, three crisp twenty dollar bills, stiff in their used state.


Under the table, the walnut chair legs end drag marks made through a circle of salt or sugar drawn on the red brick patio. A splash of red with radiating tendrils mars the grains like an open wound where the third Maraschino landed and came to rest.
Posted by Vanessa Victoria Kilmer at 6:42 AM