Coffee and a Tickle 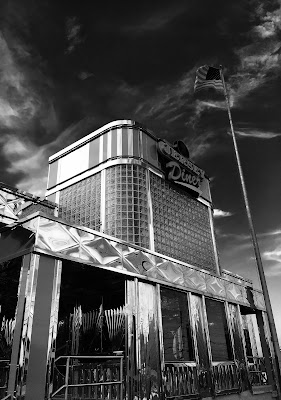 John sat at the teal and chrome counter tapping the long nail of his left pinky on the laminated surface. He stared at the waitress, the short black hair on the top of her head standing straight up, the sides buzzed down to her scalp. He yawned. He wanted coffee. He still had three hundred miles to drive before the sun came up.
He tapped his spoon on his empty coffee cup. The waitress, Sally, glanced his way, her light blue eyes shocking in her dark face. She loved the sun, but it didn’t love her back. Wrinkles showed on her forehead, cheeks, neck and hands. John couldn’t tell her age, but she had been here for as long as John had been stopping on this routine run for the past six years. She ignored him and went back to talking to the exotic man in front of her.
“Pick some food,” she said. She poked perfectly lacquered nails at the dinner menu. “Something to eat.” She mimed scooping food up on a spoon, putting it in her mouth and chewing.
The man leaned forward into the light from the overhead lamp. His skin was yellow and scaled. John figured he indulged in cosplay, although John didn’t know of any comic book conventions currently running in the area. Maybe he just lived the life. Snake Man took the plastic card from the waitress and chewed on the edge.
“Hey,” said Sally, grabbing the menu back. Her voice became more nasal as she got agitated. “Don’t eat that. What’s wrong with you?”
John watched, his need for caffeine forgotten as Sally placed a glass of milk and a plate of French Fries in front of the man. The man sniffed. He pushed the plated towards Sally and nodded. They stared at each other. Sally picked up a fry.
“Food,” she said and popped it in her mouth, chewing.
The man waited until Sally swallowed.
He picked up a fry.
“Foods,” he said. His voice hissed, the ‘d’ dissolving into a breath. He put the potato in his mouth, closed his eyes and chewed. He sighed and picked up one fry after another, chain eating them. He emptied the plate. He pushed it towards Sally.
“Foods,” he said.
“Liked that, did you?” Sally brought him another plate of fries. She had added ketchup to the plate. “Dip them, like this.” She tapped the fry in the condiment, swirled it once, getting an extra dollop on the tip. “MMmm.”
“Foods.” Snake Man ate the second plate of potatoes, again with his eyes closed.
“Don’t forget to drink your milk,” said Sally. She slid the glass closer to him. He dipped his fingers in the liquid.
“Like this.” Sally drank from her own glass of milk. “Milk,” she said and smacked her lips.
Snake Man wrapped his yellow, scaly hands around his glass. He drank, lashless lids drawn, dribbling some milk down his chin.
“Milsch,” he said and smacked his lips.
Sally laughed. She pointed to herself.
“Sally.”
She pointed to Snake Man, raised her eyebrows. No response.
She pointed to her chest.
“Sally.”
She pointed to John.
“John.”
Snake Man looked at John. His irises were green. His pupils vertical, red slits. Cool contacts, thought John. John waved at Snake Man.
“Aspis,” he said. “Ssallys.” He pointed at Sally. “Johns.” He pointed at John. “Aspis.” He pointed to himself.
“Foods.” He pushed his plate (empty except for the ketchup) and glass to Sally.
“More?”
“Foods.”
“I bet you’re from France?” Sally put a plate of French Toast drenched in melted butter and syrup in front of Aspis. She turned away to get another glass of milk for him. John admired her rear view.
Aspis sniffed the sugary dish. His forked tongue whipped out, the tip touching the syrup and recoiling. He shoved the plate. It slid off the counter and crashed on the floor.
“Hey.” Sally jumped out of the way. “I guess you’re not from France. You could have just said no.”
“Foods!” Aspis slapped his palms on the counter.
John, adrenaline coursing through his veins, stood, ready for action, holding his dinner knife. Aspis faced him, only inches away. John had not seen him move.
“Now, now, boys,” said Sally. She took hold of Aspis’ shiny polyester sleeve, guiding him back to his stool.
“Look, food.” A serving bowl of French Fries with a side of bacon and a vanilla milkshake sat on the counter.
John knew Sally did the cooking on the night shift while the actual cook slept off the whiskey he drank all afternoon. The man bunked down in the enclosed back pantry, his snores swallowed by loaves of white bread.
“Eat.” Sally chewed on a piece of bacon.
“Foods,” said Aspis. He looked sideways once at John, then closed his eyes and popped a slice of bacon in his mouth. Drool rolled down his chin. He pushed the French Fries away.
“Ssallys?” He pointed to the empty plate.
“Men and their bacon,” said Sally. “You’re all the same no matter where you’re from,” she said as she went back into the kitchen to fry up more of the cured meat. She brought out a triple portion which Aspis devoured.
Sally patted John’s denim covered shoulder. He still stood by his stool.
“Sit,” she said. “I’ve neglected you. I’ve never met a foreigner before, so I got distracted. He has a sexy accent. Have some more coffee.” She filled John’s cup. “And here’s your favorite snickerdoodles, fresh from the oven.”
John relaxed under Sally’s attention.
Sally cleaned up the French Toast mess while the men ate. The stench of cleaning fluid mixed with the food. John’s stomach roiled. He needed to leave anyway  or he’d be late for his delivery appointment. He gulped his coffee, burning his tongue.  He left some cash next to his cup.
As he reached the door, Aspis and Sally were hugging. Aspis’ tongue snaked out, touched Sally’s neck.