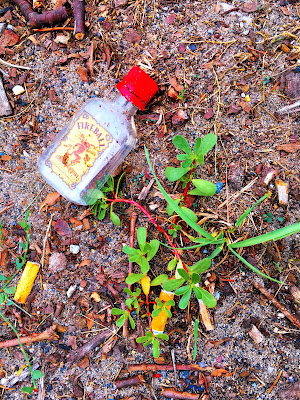 I ran through the tall, wet grass, the sharp leaves slicing at my naked knees and exposed shins. My black and white canvas sneakers got soaked, muddy water seeping into the fabric and squishing as I pounded the ground moving as fast as I could. My own breathing was so loud that I couldn’t hear the sound of the person chasing me. The footsteps I had heard earlier drowned out by my own noise. I wanted to turn around and look to see how close he was but I couldn’t take that chance. My stopping might be the one minute he needed to catch me.

My foot landed on a board of some sort. I felt its shape through my shoe. It threw off my stride and my balance. I twisted my ankle, listed sideways, throwing out my arms in an attempt to gain my balance once more. I put all of my weight on my uninjured foot which turned me around enough to see behind me. The lot was empty except for trash. I stopped moving. My side hurt. Sweat drenched my hair. I rubbed the skin of my legs. They itched. I felt like a fool. A dirty, sweaty, out of breath, ridiculous fool.

Street lamps dotted the perimeter of the lot. Only two of them were lit but they were enough to be sure I was alone. I limped through the alley way towards the street looking over my shoulder every few steps. I was still spooked. My shorts and t-shirt were from the second hand store. I didn’t carry any bags. I didn’t have a phone. I didn’t know anyone because I was just passing through town on my trek to the shore. It was silly to think anyone would be after me. I was a nobody. A poor. down-on-my -luck drifter searching for a warm spot on a quiet beach to have a rest.

I found an alcove with a stoop, sat down and took my shoes off. My ankle wasn’t swollen but it sure did hurt. I had no idea how much further I had to travel. I could smell salt and fish so I had to be close. I couldn’t hear the surf though. All I wanted to do was get to the beach, crawl under a boardwalk and sleep. Maybe sleep forever. There wasn’t much use in going on. The ocean would be the end of the line for me in so many ways.

Perhaps, I could just close my eyes and take a little nap here. No. No, I want the sun warmed sand on my back. It would mold to my body and cradle and comfort me. It would hold me. I used the wall to leverage myself up. Not far now. I would reach my goal. I would accomplish something before it was all over. I picked up the pace. In my haste to reach my destination, I almost missed the sound of footsteps behind me.

Bob ran through the lot like he was being chased by the Hounds of Hell. He had heard footsteps behind him for several blocks before he turned off the street that would have taken him directly to the beach. When he turned around to see who was following him, the street was empty. There wasn’t even a person across the road. He couldn’t imagine where the footsteps were coming from. Perhaps they were only in his head, but when he started walking again, there they were, so he turned into the nearest alley and took off running.

He ran through the rundown grassy lot getting his beat-up sneakers wet and muddy, the weeds scratching and cutting his bare shins causing his skin to itch. He ran flatout until his foot hit a board and he twisted his ankle. He hit the ground hard, skinning the palms of his hands as he tried to break his fall. He lay on the ground, breathing hard. The lot was quiet except for the chirping crickets. Even the birds were silent. And so were the footsteps. The light from the few unbroken lamps showed him he was alone.

Once he caught his breath, he forced himself up and hopped through another alley and back out to the street. He was tired, physically and spiritually. He wanted to get to the beach, lay down and never get up again. He no longer had anything, so he couldn’t figure out why anyone would be chasing him. He had never been to this city before, so no one knew him.

He found a stoop in front of a cigarette shop, flopped down and pulled of his shoe. His ankle hurt but it wasn’t swollen. He leaned his head against the cement wall, closed his eyes. Visions of his former life played on the screen of his inner eye lids. A home. A family. A career. All gone now. All he had left was this shell and a few meager rags to cover it. He only wanted one last thing. He got up. He had just enough energy for this last trek.

He smelled salt and fish. The shore couldn’t be far now although he couldn’t hear the surf. He leaned on the walls of the buildings he passed, using them as a crutch. His stomach grumbled. It objected loudly to going two days without food, but Bob figured it was pointless to feed a body you had no intention of keeping alive.

He heard a seagull. It’s call spurred him on. He forgot about his aching ankle. He wanted to find the warm beach, crawl under the boardwalk and go to sleep. His walking dream was disturbed by the sound of footsteps behind him. If only they would wait to get him until he saw the ocean. He looked over his shoulder.
Posted by Vanessa Victoria Kilmer at 6:17 AM