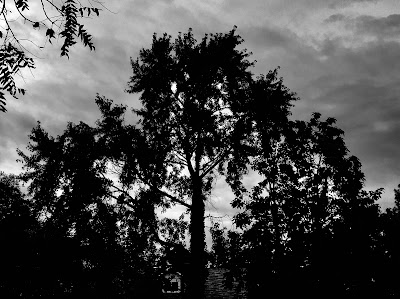 She closed her bedroom door without a sound. She stuffed a handful of her mother’s sleeping pills into her mouth and swallowed. She flung her body on the bed. She wanted a few moments of peace, of nothingness.

She tried to snuff out her life with her pillow, the feathers old and broken, the quills poking through the navy blue stripes faded to gray and the white stripes dull as fog. She passed out, her internal vision going black except for the pinpricks of stars swirling around her mind, that moment of dizziness the brink to another one of her existences.

* * *
The wizard stood on the precipice, his toes curled over the sharp edges. The rock cut into the naked flesh of his feet, his blood dripped down the red wall below. The iron from his blood mixed with the iron in the stone making both stronger.

Wind ripped at his clothes, shredding them to rags. The tendrils of fabric tangled with his long blond hair, pulling at his body and his scalp, keeping his body anchored to the earth. Without that stinging and pressure, his consciousness would float away.

He felt ten times older than his seventeen years, but he had been at this all his many lives. If he added them all up, he might just very well be one hundred and seventy. He deserved a break. But they needed him again so here he was once more.

The rocky bottom of the rift beckoned him. He wanted to fling himself over the edge and fall until the world went black. He tilted his face to the night sky. The stars winked at him, teasing him with their glorious light. He sacrificed his blood every year and every year remained the same.

He could give in to the dizziness. No one would suspect he had done it on purpose. None of the other wizards made the sacrifice for more than a couple of years. He had lasted seven. Surely, seven years of spilling his blood over the cliff was enough.

He inched his feet forward. He shook his head. He closed his eyes, lifted his hands in supplication and leaned forward. He floated down like a feather, the wind slowing his descent. At first he was worried that he was going too slow to hit with enough forced to die. Being crippled would be a worse fate than his current life.

The breath left his body in a loud rush as his bones and blood and flesh meshed into a pulpy mess. He didn't care. He had left his body about a hand's width above the ground.

* * *
Her whole body felt like she had been hit by a truck. She knew what being hit by a truck felt like. When she was eight, she had run into the street to retrieve her flip-flop. Her mother had told her to cross then called her back. The confusion forced her to lose her shoe. Her mother had her go back to get it. That's when the truck hit her, pushing her into another journey.

* * *
His hard and distended belly bulged out like a melon. It felt like a melon was lodged in his body just at the top of his colon and anything he put in his mouth, whether it be food or drink, sat upon that blockage. He knew how that little boy with his finger in the dike felt. The pressure built. He felt like throwing up.

He spent the last six days walking, swallowing castor oil, drinking prune juice and eating stool softening pills. Nothing worked. If the dam didn't break soon, he'd be forced to go to the hospital, and that he couldn't risk. They'd draw blood and find an ancient strain that hadn't mutated in thousands of years. His blood was at once ancient and young, his DNA so pure that he had no antibodies for some of the most basic diseases that men in this age survived. Constipation would kill him and he was ok with that. He'd had enough of this particular life as it was.

He knew, of course, that technically he wouldn't be dying, ever. Contrary to popular belief, reincarnation wasn't a soul’s linear movement through time, leaving one body and entering the next. It was more like living simultaneously in various forms, in multiple dimensions. Most of the entities did not know of each other. He was one of the few who knew the others.

Psychiatrists and psychologists mistook this phenomenon as multiple personalities or schizophrenia, but they were wrong as they were wrong about so many things. The various diseases they diagnosed were merely various forms of consciousness and instead of medicating people out of those states, they should have been helping people explore them like the shamans of old.

A sharp pain punctured his belly button. He rolled off of the mattress on the floor, got to his knees and crawled to the bathroom. He threw up in the toilet, sweat broke out on his forehead, chills wracked his body. He climbed onto the toilet seat just in time for the gush of poison to leave his body.

Poison. He hadn't considered poison before. He knew, like a light coming on in a pitch black room, that he had been poisoned. He knew who had done it. That stupid girl. Somehow she managed to cross dimensions and invade his body. She was so miserable she thought she could end the pain by killing herself.

He shook. His muscles strained. He pushed all of the detritus out into the toilet. He had to flush several times. Six days of waste seriously stopped up the pipes like it stopped up his body. Once all of this crap was gone, he'd have to have a serious talk with that little bitch.
Posted by Vanessa Victoria Kilmer at 12:18 PM