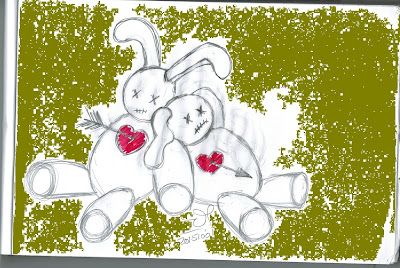 There's this thing called Write31Days where you write and post everyday in October based on some theme of your choice. I hesitate to make another everyday commitment as I've pretty much accepted the fact that I suck at that sort of thing. As soon as I say I'm going to do something everyday, the rebel rears its ugly head and you can count on the fact that it ain't gonna happen. Hey, but I'm nothing if not a sucker for punishment and soul searing disappointment. Let the fun begin.

I'm going to write on weird things I've experienced. I figure this will be a good theme for October. There will be no editing except for spelling errors, if I catch them. I'm shooting for a stream of conscientiousness kind of thing.

Maybe you will have experienced some of the things I will tell you about. If so, great, neither of us are alone. If you haven't and you think I deserve a white padded room, please remember I'm a writer and I'm lying.

I'm going to call these things essays. I like the idea of being an essayist. I don't really know what an essay is but like poetry, I find the concept romantic and I wanna do it even though I haven't a clue as to what's going on.

Since the bunnies in my drawing are dead from an arrow through their hearts, today's theme will be on one aspect of death.

My mother died almost a year ago (11-11-14 at 10:10.) While her passing has done many unexpected things to my head that I never could have predicted, it has highlighted to me with staggering force that we are not our bodies.

She was so uncomfortable and in pain before she left us. Air rasped through her. Her body was heavy with gravity, compressing into itself to the point where her physical self no longer even looked like her. She drew us to herself like a lodestone. She couldn't have been more of this world. And then she expelled and she was gone.

What was left in the hospital bed was so clearly not her. She wasn't in the room. She wasn't in her casket at the funeral home and she wasn't placed in her grave. She was gone.

On Tuesday of this week, she was back. She has stopped by several times since she went away last November. Around 09.30 two days ago, she stood just behind me, placed her hand on my left shoulder (out of character since we rarely shared good touch) and whispered in my right ear, "Just let it all go." (also, very out of character - if you knew my mother, she never let anything go.)

She has stopped by about a dozen times. If I knew I would write about this, I'd have kept better count. Her essence is materially with me and then quite clearly gone. Each time her message is the same: nothing here matters as much as I think it does.


Posted by Vanessa Victoria Kilmer at 9:26 AM